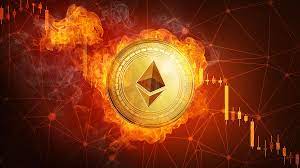 In terms of crypto specific factors the most significant was of course the merge which saw Ethereum successfully transition from proof of work to proof of stake last Thursday.

The entire crypto market was rallying up to the merge but as you all know the market crashed a few hours after the event.

In addition to the poor CPI print from the day before ETH’s poor price action was due to ETH holders selling the news according to blockchain analytics tools like Nansen and Glassnode.

More than one billion dollars of ETH flowed onto exchanges shortly before the merge, the most in six months.

Large amounts of crypto moving on to an exchange typically signals an intention to sell.

In this case it looks like most of the sellers were Ethereum miners whose ETH holdings had hit a four-year high at the end of August.

Now to be clear some cell pressure from Ethereum miners and early ETH holders was expected and probably even priced in what was not expected or priced in.

However was how institutional investors would react to the merge in other words the demand side of the post-merge ETH equation.

For context many ETH holders were expecting institutional investors to buy up large amounts of ETH the moment the merge was complete.

This is because the merge lowered Ethereum’s energy usage something that had been a big concern of ESG obsessed investors.

You know that institutional investors had actually begun offloading ETH the week before according to coin shares.

They chalked it up to concerns that something might go wrong during the merge and though that wasn’t the case.

It’s the right idea, basically it’s more than likely that institutional investors are waiting on the sidelines to make absolutely sure that the merge was in fact a success.

Put differently they’re hanging back to see if something goes wrong on Ethereum’s Beacon Chain in the days and weeks following the merge.

This might even include concerns around centralization and it looks like there is no shortage of such concerns case.

In point blockchain analytics tool sentiment found that around 40 of blocks on the Beacon Chain are being produced by just two validators specifically Coinbase and Lido Finance.

Over the weekend Coin Telegraph reported that over 80 percent of all relay blocks on the Beacon Chain are being built by flash bots a tool used to track and mitigate minor extractable value or MEV.

Now it’s not just centralization on the beacon chain that has ETH holders concerned about Ethereum, there are also concerns about Ethereum infrastructure providers such as Infuria which dominate their respective layers of the Ethereum.

Now to Infurer’s credit – the company recently announced that it will be decentralizing its infrastructure.

Oddly enough Infurer’s parent company Consensus explained that the plan has always been to decentralize its products from day one including the popular Metamask browser extension wallet.

I say oddly because Infuria’s announcement came shortly after SEC chairman Gary Gensler commented that proof-of-stake cryptocurrencies could be seen as securities.